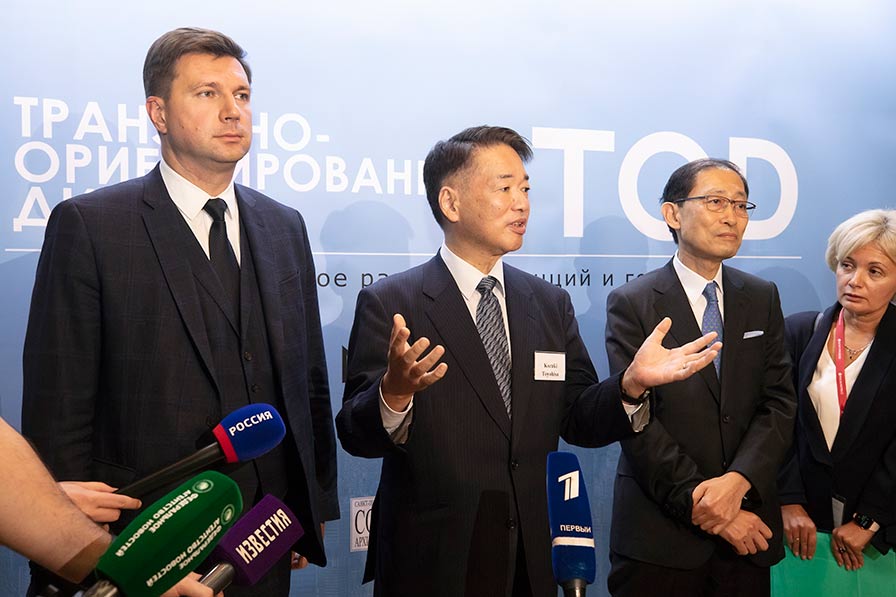 Held at the St. Petersburg House of Architects, attending dignitaries included Consul General of Japan in St. Petersburg Yasumasa Iijima, Vice Governor of St. Petersburg Nikolai Linchenko, City Chairman of the Committee for Urban Planning and Architecture Vladimir Grigoriev, Nikken Sekkei Chairman Tadao Kamei, Executive Officer and Principal, Global Design Group (GCC/CIS/India) Fadi Jabri, as well as eminent local architects, large development company heads, and representatives of executive authorities.
The exhibition is dedicated to current issues of urban planning and transit-oriented development, in which a transport hub, such as a metro station, serves as a center for public activity and urban agglomeration. A variety of TOD related photographs, detailed diagrams and multimedia project content are presented at the event.
The admission-free event is scheduled to run through October 29, and coincides with the publication of the Russian edition of the book Integrated Station-City Development: the Next Advances of TOD, which details principles of transit-oriented development design. Other Nikken Sekkei projects are viewable at the city’s Bolshaya Morskaya Architectural House.

Many Nikken projects in Russia, primarily in Moscow, are directly linked to underground stations. In all, the company implements some two dozen projects in the country. These include Sberbank-City, the headquarters of Russian Railways (the Rizhsky Freight Yard in Moscow), and a master plan for the development of Vladivostok’s urban district. In 2020, the company won the Gazprom Neft international competition for its Okhtinsky Cape (“Crystal Ship”) complex design, also in St. Petersburg.

Along with the Japanese Embassy in Russia, support for the event is provided by the Regional Creative Public Organization of the Union of Architects of the Russian Federation.

“Japan’s experience in urban development, which is based on transit-oriented development design principles, is important for St. Petersburg, which faces the same problems as other major cities in the world,” said St. Petersburg Vice Governor Nikolai Linchenko. “We share common urban planning tasks: to stretch the centers of gravity and lighten (the burden of) daily commuting.”

“I’ve learned much about Russia, its culture, people, business and other aspects important for international relations,” said Nikken Sekkei Chairman Kamei. “We would like to share our experience in transit-oriented developments, which are widely showcased in Asian countries.”

For more than 120 years since its founding, Nikken Sekkei projects have had a large impact on the appearance of cities and the idea of urban design. Employing more than 2,000 architects, the firm is one of the world’s largest architectural design firms. Some of its more iconic world projects include TOKYO SKYTREE, the world’s tallest free-standing broadcasting tower, Futur Camp Nou, a renovation of the soccer stadium for FC Barcelona, the Guangzhou Library in China, and One Za'abeel in Dubai.

According to St. Petersburg chief architect Vladimir Grigoriev, the city government is preparing to present to the governor a new concept of urban development, designed to fully use the railway infrastructure in the interests of citizens. Grigoriev, who also serves as Chairman of the Committee for Urban Planning and Architecture (KGA) noted at a recent roundtable that the long-standing task of integrating development of large hubs of passenger traffic becomes more and more acute.

“Nikken Sekkei is working on creating the faces of cities and the faces of companies, including public spaces in their designs, said Ambassador Kozuki, “I am glad to see unique Japanese designs as the ‘face of the city’ in Russian capitals.”